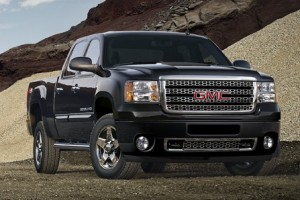 PickupTrucks.com just held a new set of tests comparing the Ram 3500, Ford Super Duty F-350, and GMC Sierra 3500HD in a grueling set of tests they called the Heavy Duty Hurt Locker.  The three trucks were put to the test under grueling towing loads of 19,400 pounds that put them within 90% of their gross combined weight limits–loads so high that the testers had to get commercial driver’s licenses in order to drive the trucks legally.  During hill-climb tests up some of the most grueling routes in the western United States including the Eisenhower Pass and Davis Dam route that will be used in 2013 to establish uniform tow ratings across brands, the testers decided to pile five adults into the trucks–putting the Sierra 3500HD’s gross combined weight to 28,600 pounds, or 98% of what the truck is rated for.

Just as important as towing prowess is the ability to slow the truck down safely when going downhill.  GMC Sierra offers an advanced Duramax 6.6L diesel engine paired with an Allison 6-speed automatic transmission.  In testing the new-for-2011 exhaust brake, the testers found it to pair exceptionally well with the transmission to shift down and slow the truck when going down steep grades and only had to intervene with their feet five times during their standardized test.  By comparison, they found the Ford F-350′s exhaust brake to be “weak” and inspired “that ‘white knuckle’ feeling you don’t want while barreling down I-70 at night.” The Ford Super Duty required a whopping 13 applications of the service brake to slow it down over the same route, which caused the brakes to get exceptionally hot to the point of smoking by the end of every descent.

In the end, PickupTrucks.com crowned Sierra HD the winner, saying “The Sierra was the most comfortable rig over our long days. It was also the quickest for the driver to get comfortable with the trailer and load.”